Staffordshire Police have escaped prosecution for tweeting the names of people charged with drink driving, the Information Commissioner’s Office (ICO) has said.

The ICO investigated Staffordshire Police following a complaint about the tactic, which was used in a Christmas drink driving campaign. West Midlands Police, which used a similar tactic, was not investigated.

The ICO said it had received an assurance from Staffordshire Police that it would not use the hashtag #DrinkDriversNamedOnTwitter in future campaigns. 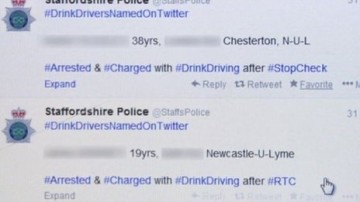 When spoken to by the BBC, Staffordshire Police declined to comment.

While some claimed that the campaign would deter drink driving, many civil liberties campaigners argued that by tweeting the names of those accused but not convicted, the Police were undermining the presumption of innocence until proved guilty.

An ICO spokesperson said: “Our concern was that naming people who have only been charged alongside the label ‘drink-driver’ strongly implies a presumption of guilt for the offence.

“We have received reassurances from Staffordshire Police the hashtag will no longer be used in this way and are happy with the procedures they have in place.”