The so-called “stealth cameras” will be grey rather than bright yellow and will be used on busy stretches of motorways such as the M1, M6 and M25.

The new cameras, known as HADECS, would be used on sections of “smart motorway” where traffic flow is controlled by variable speed limits and use of the hard shoulders. According to the Highways Agency, the new cameras would be signposted. 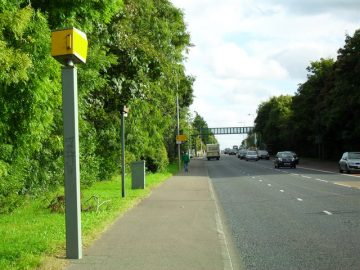 The new cameras are likely to prove controversial. According to the Highways Agency, smart motorways smooth traffic flows and increase capacity. However, critics say that the cameras are not about road safety but are designed to raise money in fines.

Currently, drivers caught speeding at up to 86 mph can pay to attend a Speed Awareness Courses, provided they haven’t done one in the previous three years. Motorists driving at up to 96 mph are eligible for a Fixed Penalty of three points and £100. Beyond that, drivers are likely to receive a Magistrates’ Court Summons, and here the penalty depends very much on the speed. Motorists who reach twelve penalty points within three years are at risk of disqualification.

As the cameras will be less visible, critics say that they will have no impact in slowing drivers down. A spokesman for The Alliance of British Drivers (ABD) said: “If there is a good reason for the traffic to be slowed down then the cameras need to be as visible as possible.”

The new cameras could be operating along more than 100 miles of motorway within two years, with a further extension covering at least 400 miles.

If you have been caught speeding why not find out more about our services here.