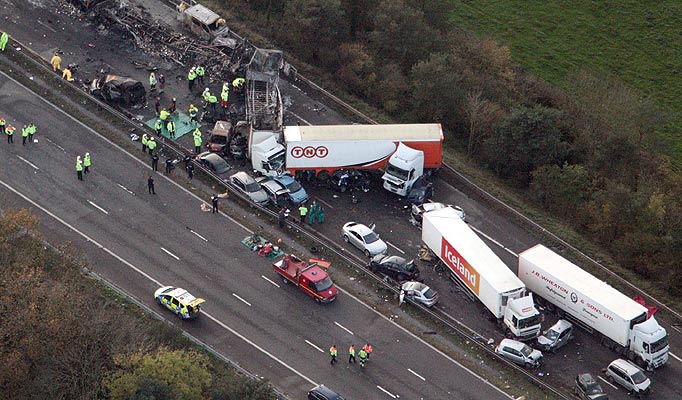 A man in charge of a fireworks display held on the night of a motorway crash in which seven people died has been cleared of breaching health and safety laws.

Geoffrey Counsell had denied a charge of failing to ensure public safety for the Taunton Rugby Club display. He had been originally charged with seven counts of manslaughter but the charges were dropped earlier this year. Instead, he was charged under the Health and Safety at Work Act.

A Judge at Bristol Crown Court directed the jury to find him not guilty.

The pile-up involved about 30 cars when they were engulfed by a thick fog on the M5 on 4 November 2011.

After the hearing, Mr Counsell said he believed the decision to prosecute him was “motivated by a desire to find someone to blame for this terrible accident, simply for the sake of doing so”.

The Crown Prosecution Service (CPS) said it sought evidence from experts and eyewitnesses before deciding to charge Mr Counsell.

The Judge ruled that Mr Counsell had “no case to answer”.

Ordering his acquittal, the Judge said the prosecution’s case was “heavily weighted” on “hindsight” and there was not sufficient evidence to show that Mr Counsell ought to have foreseen that smoke from the display could have drifted and mixed with fog to create thick smog.

This case shows that tragedies such as this should not necessarily lead to criminal proceedings.

If you have any questions about a Health & Safety or motoring offence, get in touch with our team.